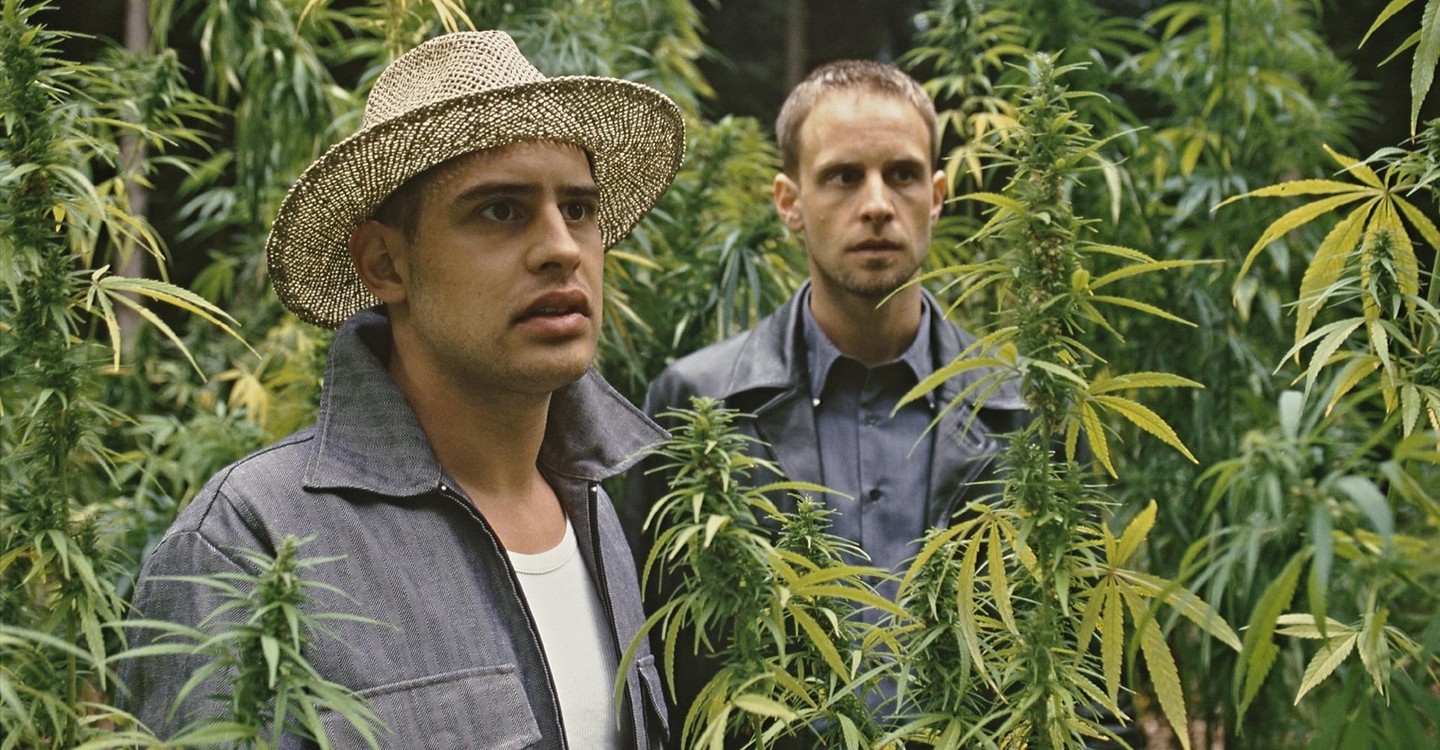 The stoner movie is a genre unto itself. No other legal mind-altering substance gets its own movie genre, really – there are no coffee movies, and while there are some great flicks about beer (Strange Brew, anyone?), there’s not really enough to constitute an entire “booze genre.” Only cannabis, with its perfect blend of taboo-ness and giggle-ocity, can maintain such a strong cultural thread in the history of cinema.

So without further ado, here are 13 great stoner movies – some of which you probably haven’t heard of, and others you’ve heard of or even seen, but probably forgot about.

We’ll start with one you forgot about, but almost certainly saw if you’re a fan of weed flicks. Directed by the broadly talented David Gordon Green, Pineapple Express is a hilarious weed-centered crime caper that shares its name with the strain of cannabis that Seth Rogen and James Franco – of course – are chasing after. With great performances by Gary Cole and Rosie Perez, and a theme song by Huey Lewis – his first since Back To The Future – this is one of the best stoner movies of the 21st century.

Another entry in the Rogen/Franco collection, This Is The End is probably best described as a stoner version of The Rapture with lots of goofy celebrity cameos. In fact, celebrity cameos are pretty much This Is The End’s entire gimmick: Rogen and Franco play themselves, along with other big names in comedy like Mindy Kaling, Michael Cera, Jonah Hill and, uh… Emma Watson. Yeah, Hermione was in a stoner movie about the biblical armageddon.

Blending genres in crazy ways is often Hollywood at its best – Shaun Of The Dead combined zombie gore with romantic comedy in a groundbreaking way – but it may be that the action-stoner movie won’t take over the multiplexes anytime soon. Ultra, the first attempt at such an unlikely hybrid strain, wasn’t particularly well received – it only made about $27 million worldwide and has a 42 percent rating on Rotten Tomatoes – but it’s definitely worth a watch.

This isn’t really a movie about weed, but it is a Cheech & Chong movie, so it goes on the list. And yeah, you read that right: The Corsican Brothers is not a movie about weed, nor does weed figure anywhere into its plot. And it stars Cheech Marin and Tommy Chong. It’s their first and only movie that’s not about pot. It did not amass much of a following.

Sure, sure. Everyone remembers the time Harold and Kumar went to White Castle in Harold And Kumar Go To White Castle. But nobody ever talks about the time Harold and Kumar escaped from Guantanamo Bay in Harold And Kumar Escape From Guantanamo Bay or when they had a very 3D Christmas in A Very Harold And Kumar 3D Christmas. They were both pretty much just OK, but featured Neil Patrick Harris heavily, so much like every season of How I Met Your Mother, you are required by federal law to watch them.

Animation and stoner content is nothing new. Fritz The Cat featured plenty of drug use (though is it a stoner movie? Debatable). And one of Family Guy’s finest moments was its paean to pot, “Everything Is Better With A Bag Of Weed.” So if they were gonna make a feature length cartoon about the wackiest of tobacky, of course it would involve the holy dyad of doob. Sadly, most of it is just adaptations of C&C’s old comedy albums, but hey: Cartoons!

Featuring 90s stalwarts Luke Wilson, Alicia Witt, Jack Black, Jamie Kennedy and Brittany Murphy, Bongwater has a wandering plot and is overall kind of depressing. Oh, it also has Scott Caan and Andy Dick, so really it’s in the running for the most 90s movie ever. It’s based on the novel of the same name by Michael Hornburg, which is better overall.

The only movie on this list with subtitles, Lammbock is a German film about two pizza delivery guys who decide to start selling weed. Stoner comedies aren’t generally a genre that translates well into other cultures – many other countries either don’t have the same taboos Americans do, or they have stricter censorship of drug-related stories and jokes than in the States.

Yeah, they made a musical out of the most popular marijuana movie of all time. Based on the off-broadway stage musical that premiered in 1998 (the same year Bongwater came out!) and toured cities across North America, even opening in London. Director Andy Fickman took the show to the screen in 2005, bringing Kristen Bell (who reprised her role from the stage production) along for the ride. The whole thing is a hoot, particularly the “Mary Jane/Mary Lane” show-stopper number.

This one’s another product of the 90s, but isn’t strongly marked by that decade’s ubiquitous stars; plus, it takes place in the 1970s. An ambitious yet understated indie, The Stoned Age features great tunes by Blue Oyster Cult and more than a few of the unintentionally funny errors usually made by indie filmmakers (like reflections of the crew visible in at least one scene).

If you enjoyed big comedies like The Long Shot, 50/50 and Snatched, you’ll probably enjoy this early effort from director Jonathan Levine, featuring Ben Kingsley as a psychologist who trades therapy for weed. Kingsley may say yes to a few too many roles that he’s overqualified for (like Dragonheart 3: The Sorcerer’s Curse), but this absolutely is not one of them, and it’s worth watching just for his performance.

Another 90s almost-classic, this wasn’t directed by the Farrelly Brothers (of Dumb And Dumber and There’s Something About Mary fame), but was adapted from a novel written by Peter Farrelly. This might be Alec Baldwin’s first Boston accent, and the actor is perfectly suited to the Farrellys’ goofy-with-a-heart-of-gold aesthetic. More dramedy than comedy, this one’s definitely worth a watch.