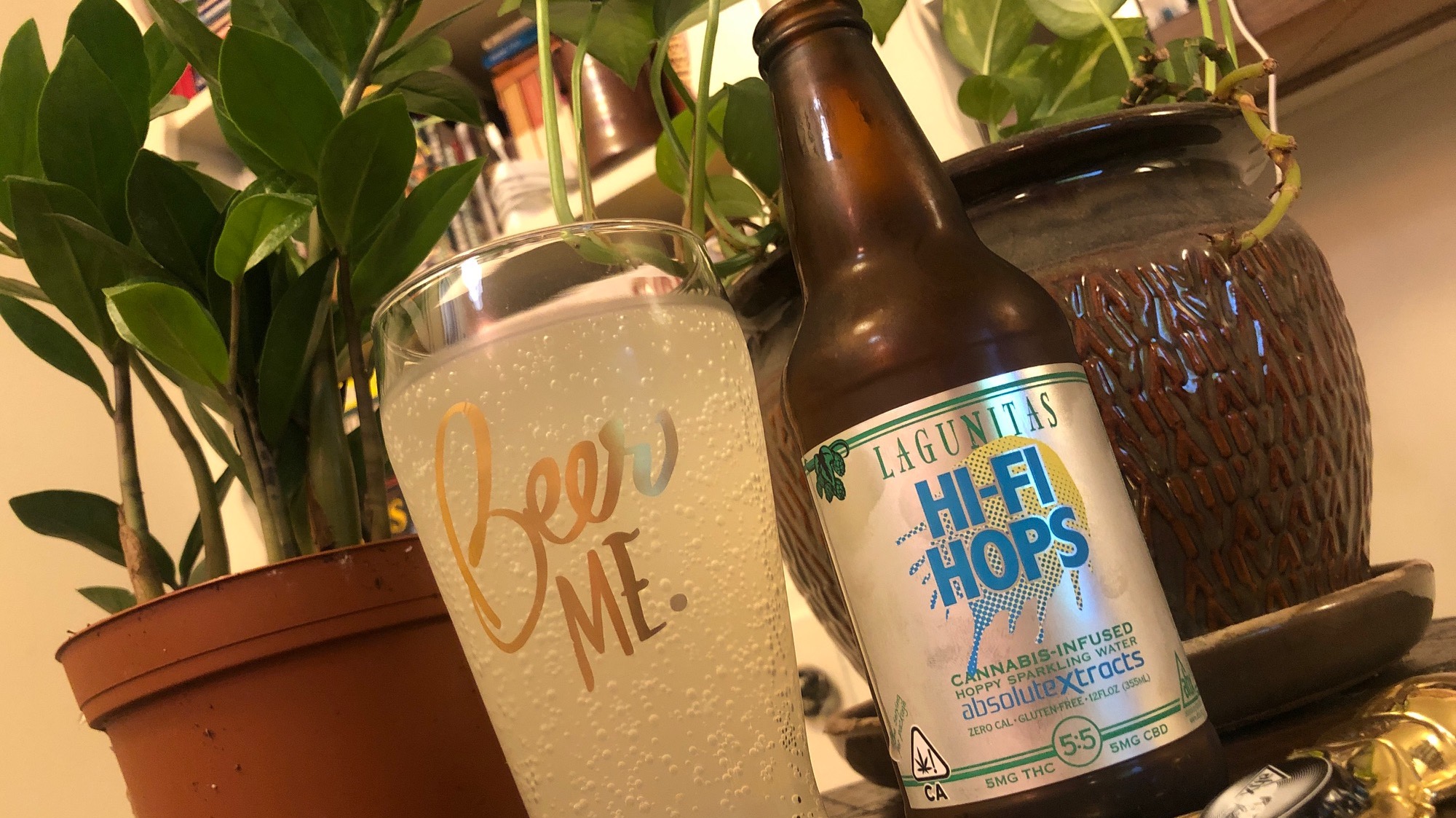 A Cicerone is basically a beer sommelier – someone whose area of expertise is laser-focused on beer. That includes beer types – from porters and stouts to bourbon-barrel aged ales to IPAs to imperial lagers and everything in between. It includes beer from around the globe, from differing styles in the eastern and western US, to timeworn classics from Belgium, Poland and the UK, to emerging craft breweries in Japan. It includes pouring beer, serving beer, pairing beer with food and maintaining keg systems and storage temperatures.

So as someone who began getting re-acquainted with cannabis after California legalized recreational pot use a few years ago, you can imagine how excited I was to learn that Lagunitas Brewing in Petaluma, CA was releasing a hoppy drink with infused cannabis, I was pretty excited. Two of my favorite things coming together! Sort of. But more on that later.

One of California’s signature breweries made a cannabis drink? Yup. If you spend any time at all on the dispensary scene, you’ve probably heard of Hi-Fi Hops, but if you’re not super familiar with the craft beer scene, its pedigree might not impress you. Lagunitas is one of the top-selling craft breweries in the United States (though strictly it hasn’t been considered a craft brewery since Heineken bought it in 2015, but corporate domination of the craft beer industry is a topic for a different time, and a different website).

And Lagunitas is no stranger to the cannabis community. For years since its founding, and until a copyright claim from another brewery made them stop, Lagunitas used “420” in much of its advertising. The brewhouse itself was so weed-friendly that in 2005 it was raided by California’s chief alcohol control agency for alleged pot dealership happening on-site. The undercover agents couldn’t get anyone to sell them any. They could only get people to offer it to them for free.

Today, Lagunitas has joined forces with the cannabis industry to create something that celebrates both beer and weed culture. But there’s a bit of a catch.

Hi-Fi Hops isn’t beer. This surprised me the most, considering the press that accompanied its release; most headlines crowed about a new “cannabis beer.” But it’s not beer (and to be clear, Lagunitas never claims that it is). Beer is an alcoholic beverage that, at minimum, requires four ingredients: Water, barley, malt and hops. There’s no alcohol in Hi-Fi hops; nor is their any fermentation involved, as with beer.

It’s actually closer to something like White Claw or the other hard seltzers that are flooding shelves right now – a simple flavored seltzer with a mind-altering additive. And that’s not a complaint – just because I’m a Cicerone doesn’t mean I’m a beer snob. White Claw is delicious.

But hey – just for fun, let’s rate Hi-Fi Hops, just like we would a beer, huh? Hey, you’ve got me here, you may as well use me.

I sampled two of Lagunitas’s three offerings: One was an equal balance of THC and CBD, at five mg each. The other was 10mg of THC with no CBD. Each was pretty indistinguishable from the other in every aspect but the high, so my comments below apply to both beers equally. I didn’t try the third variety of Hi-Fi Hops, a CBD-heavy blend with only 2mg of THC.

The pour. Hi-Fi Hops is sold in brown glass bottles – normally the second best way to store beer after cans; cans let in no light, and brown glass blocks 80 percent of light, which is usually good enough. In this case, the brown glass only serves as a reminder of the beverage’s beery roots. Its color is very very very light straw, reflecting the fact that it’s basically a mix of fizzy water, cannabis oil and flavoring. By and large, it looks refreshing as hell.

The aroma. This is where the hops come in, and they come in strong. Hops are a turnoff to some beer drinkers who still feel overwhelmed by the craft beer arms race in the 90s and early 2000s, which produced a series of increasingly bitter beers. But hops add more than just bitterness: They can add a sweetness redolent of newly-cut grass, or a piney dankness that many people actually compare to the smell of cannabis. They can even add citrusy notes. All of those are tremendously present here, and with no malt aromas to compete with, the hops smell absolutely delicious here.

The flavor. Just like White Claw, these things are dangerous. Because they taste amazing. My first time trying a hard seltzer was an accident: I arrived at a party thirsty as hell, and pounded a hard seltzer in seconds, not knowing it was alcoholic. Of course, I realized it a few minutes later when the booze kicked in, but I remain shocked at the fact that there was no difference in flavor between alcoholic and non-alcoholic seltzers.

Hi-Fi Hops is the same way. The hop flavor is lighter than the aroma would indicate, but all those same notes are still there: Pine, grass, maybe a little lemon. But the flavoring is very light – maybe stronger than a La Croix, but still not as heavy as most hard seltzers. It’d be easy to pull down three or four of these things after a workout. Which, if you’re a seasoned cannabis user, you could probably do with the 5mg THC bottle. I prefer to take my edible consumption a little slower.

The high. The cannabis oil in Hi-Fi Hops is provided by AbsoluteXtracts, so there’s no question about the quality. I preferred the even blend of CBD and THC, which offered a smooth, relaxing high without welding me to my couch. The higher THC blend was a solidly energetic high but didn’t improve my mood much, though I was having a pretty bad day otherwise, so if the anti-pot crusaders want to prove that weed doesn’t solve your problems, maybe I’m exhibit A.

But both highs were solid. I’d buy either of these again, and at eight bucks a pop, they didn’t break the bank.

The rating. Again, remember this isn’t beer. So it’s not gonna taste like beer. But maybe that’s a good thing! Despite the vast growth of the craft beer industry – especially in California, which for now is the only place you can get Hi-Fi Hops – lots of people still have trouble acquiring a taste for beer. Plus, while mixing alcohol and edibles might not be so bad, it’s probably better to be able to fine-tune the process by keeping your ethanol separate from your pot.

Overall, Hi-Fi Hops is a 5/5 and I’d absolutely buy it again.